At CTH Events Paris, our goal is to create destination wedding in Paris that live up to your dreams and hopes. Thus, CTH Events Paris offers you the possibility of getting married in a sumptuous and historical French castle. These castles are near Paris.

Decoration
Photographer (3 hours) for your ceremony and photoshoot 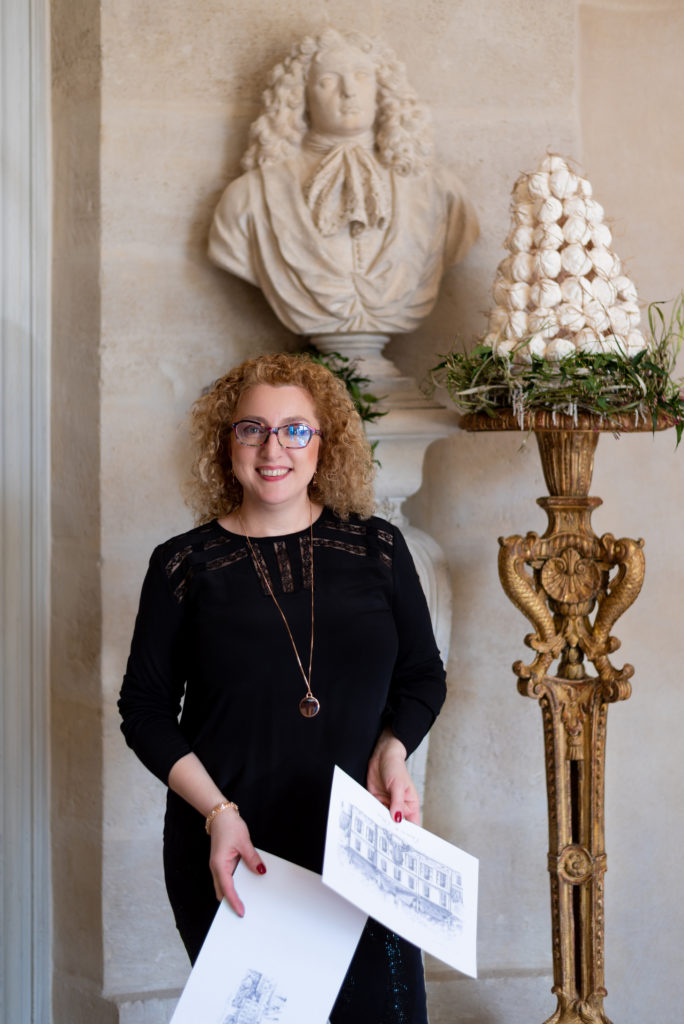 Our wedding planner agency in Paris is a master in planning and styling of unique, distinctive and luxury weddings. We have clients all over the world which we accompany from the planning to the implementation. All of our events are considered by “sur-measure” meanings : we do very individual styled weddings for each couple with extra touch of French style!

At CTH Events Paris, Inga Heusele is your wedding planner she’s the one in charge of everything.

Our ceremonies are symbolic so they are not legally recognized. From a legal point of view you should have a civil registration in your own country in addition to this real events and weddings in France.

Wedding Ceremony in a French Luxury and Historical Castle

Thanks to CTH Events Paris – Wedding in France, your wedding ceremony can take place in a French luxury château. In fact, a castle can be privatized just for your wedding in France ! The castle is privatized for two hours, the time of the ceremony. The Ceremony can take place in the Hudge Garden of the castle or in case of rain, or if you don’t want, it can takes place in the large Salon inside the castle. If you choose this wedding packages in France, your ceremony will take place in a luxury and historical wedding venues in France totally suitable for wedding and offering a sumptuous decor for your wedding photos. In general those castles, located in Ile-de-France are close to Paris so that you may be able to celebrate your wedding while enjoying and visiting the wonderful city of Paris. Those castles are generally historical and hudge from the inside (big salon and elegant dining room with antical and golden furnitures) and from the outside (hudge gardens “à la française” like the gardens at Versailles.).

English-speaking Officiant and his ceremony script

Your English-speaking officiant will conduct an intimate ceremony or a ceremony which suit you perfectly, it just depends on your wishes and desires. He/she will read his ceremony script, written just for you and this special day of your life.

After the Ceremony during which you’ll say to your beloved, you take away a beautiful souvenir certificate as a memento of the day.

To make this precious moment more special, our wedding planner agency in France suggests you to write your own personal vows for the ceremony. No worries, your Personal Planner can even help you with some tips and vow examples in case of need.

Your English-speaking chauffeur will escort you from your place of residence to your ceremony in the Castle. No worries about transportation and cars, everything is perfectly handled by your Parisian wedding planner.

After the ceremony you will be taken on an amazing photoshoot with professional photographers. This photoshoot will take place inside or outside near the luxury castle in which you’ll have your ceremony done. Thanks to the luxurious setting, your wedding photoshoot in this place resembles a real princess destination wedding in France!

After the ceremony you will be taken on an amazing photoshoot with professional photographers. This photoshoot will take place inside or outside near the luxury castle in which you’ll have your ceremony done. Thanks to the luxurious setting, your wedding photoshoot in this place resembles a real princess destination wedding in France!

As the castle is about 1 hour from Paris, it is totally possible to go for a photoshoot in Paris, in front of the greatest Parisian monuments, as a wedding souvenir. Maybe the photoshoot in the castle will be enough but maybe you would like some Parisian clichés of your Wedding in France such as pictures in front of the Eiffel Tower, the Arc de Triomphe, the Louvre Museum… For that reason, we propose you a professional couple chauffeur driven photoshoot in Paris. Then, you’ll be photographed at romantic locations to keep memories of this beautiful day. You can choose to visit the famous Paris monuments or we can help you to find some authentic Paris spots instead such as Montmartre Street or hidden secret passages.

You also may be able to get a professional video of your wedding to capture this unforgettable moment, just need to ask !

To be perfect the day of the photoshoot, why not opt ​​for a makeup and a hairdresser, especially for the occasion? This will allow a better professional rendering of your wedding photos and to make you pampered by professionals.

Restaurants addresses for your wedding dinner

The wedding reception, in others words, the wedding dinner isn’t part of the package. But, your wedding planner in Paris may give you some good addresses of restaurants where you can eat for your wedding meal.

You may also like to accessorize your basic package with add-ons like flowers. Our wedding planner agency in France creates beautiful floral designs, offers a refined make-up, beautiful decorations.

I) Where to make a wedding photoshoot in Paris? Where to be photographed in Paris for his wedding?

Paris, thanks to its breathtaking monuments and its beautiful architecture, is one of the most photographed cities in the world. The city changes the way its look every season, but each season has its charm.

In Paris, typical Parisian cafés are one of the best spot for your wedding photoshoot. photography. This is where you can take piece of life type of pictures and eat some French specialties : croissants, macarons. In order to avoid the crowds of tourists and get better picture we visit cafés early in the morning.

Moreover, It’s quite a smart idea to make a strategic stop in this place between two main locations for outfit change.

What better memory of Paris than his wedding photoshoot in front of the famous Eiffel Tower?

This place is the most requested place by the bride and groom for the wedding photoshoot.

After the Iron Lady, the Louvre Museum is probably the most requested location for couple’s pictures in Paris and especially for wedding, elopement or even proposal photoshoot. The amazing architecture of the museum and the Louvre Pyramid offer both a perfect and elegant backdrop and a modern twist to your wedding photos.

As you may guess, this place is one of the most visited places in Paris. In order to avoid crowds of tourists in your pictures we recommend to shoot at sunrise or to make night photos right after sunset.

The Parisian Place Vendome is one of the best spot to take photos in Paris because of its elegance. Thanks to the beautiful architecture of the place you’ll get a beautiful background for your wedding pictures with a touch of luxury.

Notre Dame Cathedral has always been favored by the bride and groom for the wedding photoshoot. This can be explained by the fact that this is probably one of the most authentic Paris photography locations because the city of Paris initiated from the two islands : Ile de la Cité and Ile Saint Louis which surround the Notre Dame Cathedral.

Unfortunately, since the fire that hit the Cathedral on April 2019, this location is recommended for the streets, river Seine views and cafés because the Cathedral is going to be covered for quite a long time in scaffolding and you can’t have access to the little garden as you could before.

This place has character. It has a very pleasant Parisian look and it’s since a long time a royal place. The Parisian look can be admire with elegant architecture, sumptuous columns also known as “Colonnes de Buren” and a beautiful garden which make this place the perfect one for your wedding photoshoot. However, the Palais Royal gets crowded fast, especially around 9AM, when French people start their work day. It looks pretty every season and also in the rain. Also, some place is covered in here so rain isn’t a problem.

We have so many other wedding venues in Paris to offer for a perfect wedding photoshoot. Well-known places such as the Arc de Triomphe square, the Trocadero square, the Alexandre III bridge or Bir Hakeim. But also spots very Parisian and more authentic as the small streets of Montmartre.

II ) What if it rains on the shooting day ?

Unfortunately, it is impossible to predict in advance if it will rain or not the day of the photoshoot… Nevertheless, be relaxed, you will have beautiful pictures with or without rain! In Paris, many places are covered where it is possible to make beautiful pictures in case of rainto make your perfect memory of your destination wedding in Paris. We know Paris by heart and all its hidden corners for more unique and romantic photos: covered secret passages, Louvre Museum, Royal Palace and so many others. 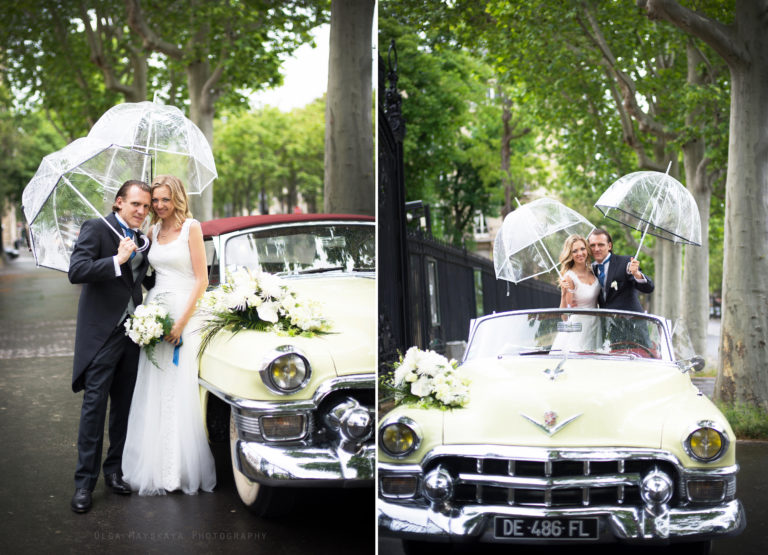 III) When is the best time to take pictures outside in Paris ?

As you may know, in terms of photography : light is the most important thing to get a good result. So, the best light for photography in general is at sunrise or sunset, what we called the “golden hour”.

In Paris, the sunrise varies depending on the season : in the summer it is around 5:45AM whereas in the winter it can be as late as 9:00AM. No worries, we’ll check together the precise sunrise time for your travel dates in order to have the best photoshoot.

Which are the benefits of a sunrise shoot ?

At sunrise, you get the most flattering light and there arealmost no people around which is very important because Paris is one of the most visited citiesand people love to organize their events and weddings in France. It just feels like you have rented the city out for yourself.

Which are the drawbacks ?

Even if you’re a morning person, it’s not always easy to wake up very early to get ready for a photo shoot !

If you’re a late riser wishes to take its pictures later in the morning, this is the perfect time for you as those photo sessions are scheduled around 9AM-10AM.

Which are the benefits of a late morning shoot ?

The sun is already high which gives the pictures a bright and airy feel.

Which are the drawbacks ?

In late morning,  the main issue is that there are already people around. So, not all the best locations will be available to take photos.

Paris, the City of Light, is so magical at night ! Night photoshoots typically start at sunset around 5:00PM in the winter and 10:30PM in the summer. Once again, no worries, we’ll check together the precise sunrise time for your travel dates in order to have the best photoshoot.

Which are the benefits of night photoshoot in Paris ?

Photos of a city that looks magical at night and gives to your picture a real romantic effect.

Which are the drawbacks of night photoshoot in Paris ?

Those night photoshoots require an associate that helps with lights. So, they are more expensive. Then, the light set-up takes time, meaning that we take less and more posed photos in the evening.

Let's create the magic together!

MADE WITH LOVE IN PARIS All rights reserved ©